If you hanker after epic, amazing travel experiences, then a cruise to the Chilean Fjords and Antarctica is what you have been looking for.

Packed full of towering glaciers, an army of marine wildlife and OMG views, the region has been topping travel bucket lists for years. The scarcely explored part of the world stretches from Cape Horn (55˚ South), at the southernmost tip of the country all the way to the Puerto Montt (41° South) and covers over 1,600 km. Big? Yes. Bold? Yes. Beautiful? Oh yes!

What can I see on a Chilean fjords cruise?

Lucky travellers to the region can expect to see behemoth sights such as the Pio XI Glacier, the Torres del Paines National Park and the Bernardo O Higgins National Park. And, what a joy these places are! When we say that travelling to the area will transform you, we really mean it!

Where to begin, if you want to tick this travel must-see off your list? Well, Silversea’s expedition cruises take you through this magnificent area on a number of cruises. Starting in Buenos Aires, Valparaiso or Ushuaia, their expedition ships will transport you in utmost luxury in a supremely soulful place. What’s more, a group of up to 28 enthusiastic and knowledgeable expedition team members will accompany you every step of the way, making sure that you never miss a thing. Want to learn more about the transformative travel that is the Chilean Fjords? Visit our blog!

Our expedition team aboard

So, what does the expedition team actually do? Well, if you’re not familiar with the term, an expedition team is a group of adventurers and educators in the region. They have decades of knowledge that they just can’t wait to share! Hand-picked by us, they are experts in the Chilean Fjords and Antarctica and offer superb insights and information on your destination. All our expedition teams are well-versed in the conservation and ecology of the area and, in the case of the Chilean Fjords and Antarctica, are aware of current IAATO guidelines.

We try to make sure that we cover every kind of question with our expedition team, so we make sure to have every kind of discipline on board. These can range from ornithologists, marine biologists, photographers, historians, geologists … the list is (almost) endless! If you have always dreamed of taking that perfect photo, have never known the difference between elephant seals and Weddell seals or simply just want help spotting an Andean Condor swooping overhead, we guarantee a cruise to the Chilean Fjords is for you.

Why not add an Antarctica cruise as well?

It’s good to remember that when you are at the ends of the Earth, you can still travel deeper. Many of our voyages are combinable with a 10-day trip to Antarctica, the epitome of all destinations for all real travellers. Silversea offers two options for travelling to Antarctica; brave explorers can traverse the Drake Passage (some people believe that Antarctica needs to be earnt), sailing around the fabled Cape Horn to reach the Antarctic Peninsula in two days.

Silversea has also introduced a new option for those who are pressed for time – or fear the seasickness. Now you can fly right over the fabled stretch of water in a private charter plane and land directly on King George Island. You’ll pick up the Silver Explorer directly from the island and start your adventure right away.

However you chose to get there, there is no denying that the Antarctic Peninsula has held travellers in its thrall for years. So, why not make this the year that you discover the White Continent for yourself?

Many voyages stop in Chile's City at the End of The World. This wind-whipped, fractured land of islands, glacial fjords and mountains, drops away towards Antarctica and offers a warm welcome and refuge. Drink it all in as Punta Arenas comes ahead of - and following - epic adventures and expeditions south across the Drake Passage. This is the city that welcomed both Captain Scott in 1904 and the rescued Ernest Shackleton and his Endurance crew in 1916.

Far from its origins as a sheep exporting hub, modern-day Puerto Natales is a colourful and vibrant town that serves as the jumping-off point for the world-famous Torres del Paine National Park. The park, which lies 2 hours to the north, has some of the most postcard-perfect scenery imaginable and draws tourists from all over the globe. The must-see park - which is a UNESCO World Biosphere Reserve - also provides ample wildlife spotting opportunities with flocks of guanacos - a relative of the llama - grazing the roadside hills, Andean Condors soaring in the heavens and if your luck is really in, perhaps even a glimpse of a puma, for Torres del Paine is considered one of the best places in South America to spot this reclusive cat.

No two words conjure up more fear to sailors than Cape Horn. With its reputation of ferocious storms and mountainous seas, it was a place where a seafarer garnered respect for bravery against the odds. That is if he lived to tell the tale. The Cape itself is the rugged insular tip of South America that projects into the storm-swept Drake Passage. The Dutch sailor Willem Schouten and merchant Jacob Le Maire, both from the town of Hoorn (hence Cape Horn), put it on the map in 1616 when attempting to circumvent the trade monopoly exercised by the Dutch East India Company over the Straits of Magellan.

Lying close to the northwestern tip of the Antarctic Peninsula, separated by the Bransfield Strait, the South Shetlands fall under the jurisdiction of the Antarctic Treaty, suspending claims on their sovereignty. Several countries maintain research bases here, and with plump elephant seals, and crowds of Gentoo, Chinstrap and Adelie Penguins also calling the islands home, it can even feel a little crowded at times. King George Island, where passengers on our Antarctica Bridge sailings will embark and disembark, is the largest and most hospitable island, hosting the majority of the research stations - some of which are populated all-year-round by tiny, hardy crews. Don’t be fooled though, these islands offer extraordinary adventure in one of the most remote locations on earth.

Enter the mighty Panama Canal, one of history’s most ambitious and spectacular stretches of waterway. One of life’s bucket list musts, a Panama Canal crossing turns you from tourist to traveller. Connecting the Atlantic and Pacific oceans, and slicing through the heart of a continent, the canal is a staggering engineering triumph, eliminating the need to traverse the treacherous waters of South America and Cape Horn. Sail one of the world’s great canals to appreciate the true scale of this achievement, as your ship manoeuvres between its vast, gushing locks and huge lakes.

English Narrows refers to a narrow passage at the southern end of the Messier Channel in Chile’s Region XI, Aysen del General Carlos Ibanez del Campos. The region is Chile’s least populated and a few kilometres south of English Narrows is Puerto Eden, the only settlement along the entire Chilean Inside Passage. With Wellington Island to the west and surrounded by Chile’s largest national park, Bernardo O’Higgins National Park, the narrow passage is at times 180 meters wide, while the entire length is given as 18 kilometres. Low-lying islands and steep mountains are seen on both sides and the Magellanic subpolar forest with its evergreen trees of the genus Nothofagus has taken hold where possible.
1 of 6

Smaller really does get you closer. Our Chilean Fjord cruises take you right into the heart of the destinations. Get as close as you can to Mother Nature’s glorious playground and enjoy the creaking glaciers and exotic marine life that makes this destination so legendary. Silversea’s small ships let you revel in the epically grandiose nature while keeping an intimate feel onboard.

Nothing says a Chilean Fjords cruise better than the see the sun rise over the Pio XI glacier or watching a whale breach before your very eyes.. With Silversea Luxury Cruises, every suite offers clear ocean views while almost all have a private veranda. So feeling the Antarctic chill with a cool glass of champagne from the privacy of your veranda has never been easier. Wake up to breakfast on the balcony, and a view to write home about! Thanks to Silversea, your luxury Chilean Fjords and Antarctica cruise just got a whole lot better.

This remains the jewel in Silversea’s crown, and the reason we are still afloat after 25 years in cruising. From sunrise to sunset, our crew is hands down the best in the business. Our dedication to guest satisfaction means: a personal butler around the clock, a guest-to-crew ration of almost 1:1, attention to detail such as your favourite drink ready upon return to the ship, reservations made at your request … your wish is on demand! This is personal service at its best.

From the moment you step onboard, whether its from Fort Lauderdale , San Juan or even Quebec, you’ll be secure in the knowledge that all your needs have already been taken care of. This means you can enjoy your favourite rum punch at your leisure, get your bartender to make the fabled Sky Juice - a local speciality or enjoy a wide range of restaurants, full in-suite beverages and of course, no salient gratuities at the end of your stay. Leave your wallets at home, and make room for your memories!

At Silversea we believe that an immersive gourmet experience is the summary of any journey and no cruise to the Chilean Fjords is complete without sampling some of the local specialities. So get ready to enjoy destination-focused dishes on board served amid the chilly ocean breeze as you travel to your next destination. 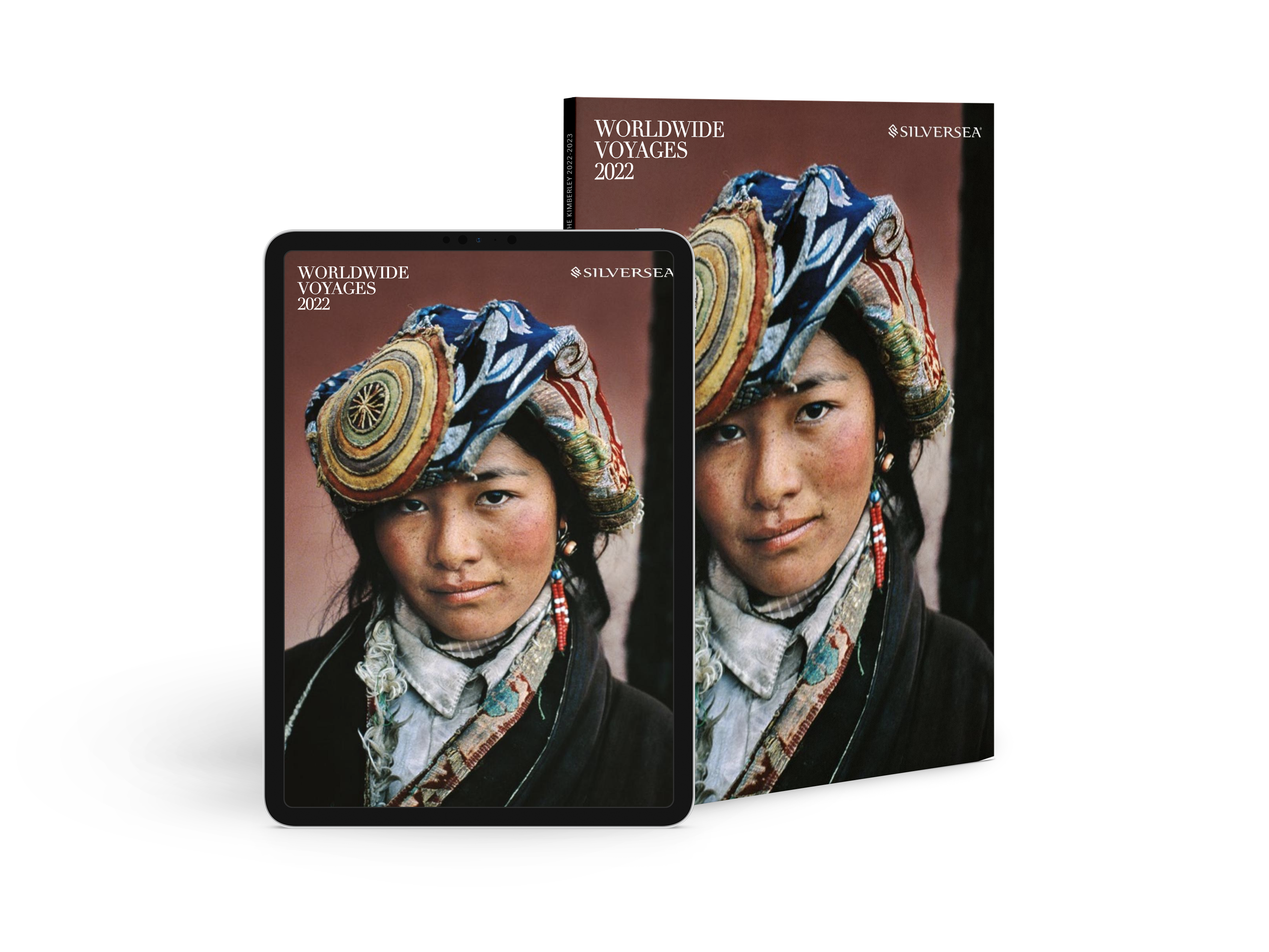 Our brochures offer a host of itineraries for travellers that dream of discovering every destination. From snow filled plains to iconic cities, superb Grand Voyages and World Cruises, we really do offer you the world.